We had a travel to Izmir only for 2 days. We took the bus to Izmir on Tuesday at 6.30 AM and we came back on Wednesday at 6 PM. Only two days but these were two busy days!

Izmir is a great city, it’s the third biggest city in Turkey and has the largest port after Istanbul. It’s one of the most beloved cities in the country ♥️

We can say it’s near to Bodrum because Turkey is a big country and the distances usually are long, but on this journey, we spent only 3.30h by bus.

We went with our coordinator, Berat. He’s from Izmir and for this reason he was the best guide for us. Arina has already been there but for Lucía was the first time.

We visited Konak Meydanın: the place that represents the city. It’s a great square in front Aegean sea and there is where is the clock tower (Saat Kulesi), the Izmir symbol.

We visited the bazar near to Konak Meydanın and of course, we were shopping, everything was cheap!

At the evening we had a meeting with university people in Atatürk Youth Center to talk about Erasmus +. We show them the presentation which we had prepared and the people were interested in this topic. We were speaking for one hour and then the people asked us some interesting questions. It was nice!

After this, we spent a good time with a beer on a nice street.

The Wednesday we were shopping and now we have a good luggage for the next travels, among other things 🙂 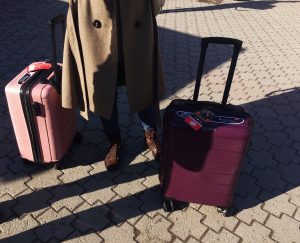 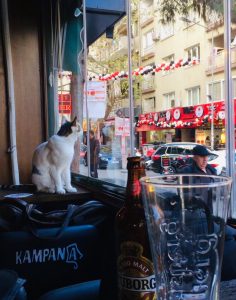 For sure, we’ll come back to Izmir more times and we’ll explore the city better.